I got my eyes examined. Trying on various frames in the shop I felt that they added a nice new dimension to my persona, making me look more distinguished? expert? librarian-sexy? I don't know. But after the exam the woman told me that my eyes are actually fine and there is no need for me to wear glasses, although they could make some glasses for when I have to work long hours in front of a computer. I thought about it, considering the fashion accessory aspect more than the necessity of having glasses, and then decided against it. No need to waste money on glasses I don't really need.

Then it occurred to me that a Thai massage would be great. So I went to a little place near where I live and it was out-of-body-experience level Good. I need to make that a regular thing.

Saturday I worked in my studio on various paintings. I finished a pure abstract piece, something that I began way back when I was in Chicago, but have waited all these years to figure out how it should go. I think I like it. I think I'm going to try to make more of these, this kind of painting. 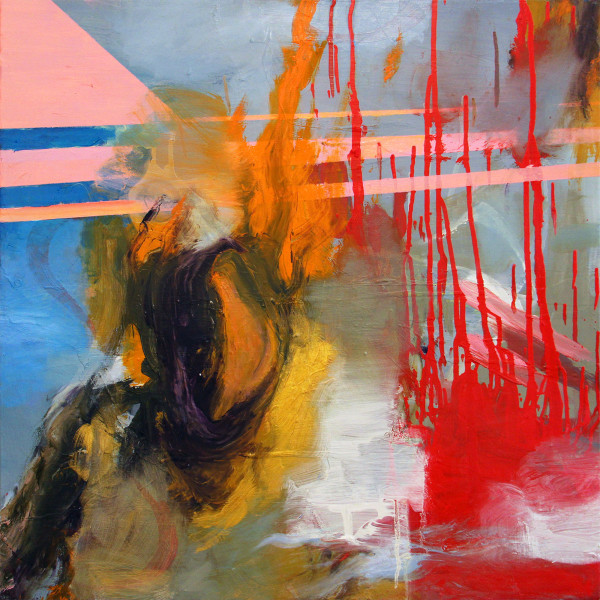 Saturday I went to another art opening at the Kreuzberg Pavillon, where I spoke to the owner a bit, and then with the artists showing. It was a really nice, cerebral show of works on paper. The more I go to this gallery the more I like it – the crowd it draws as well as the kind of work they show. I'm considering putting together a proposal for an exhibition there myself.

After the opening I returned home to find my street again in riot mode. So I changed out of my Fine Art Viewing attire, put on my leather jacket and combat boots, and went outside to watch the aggression. Police vs. anarchists – it's a little like American football. The police in their riot gear looked like a platoon of Darth Vaders, so the whole scene looked like Team Darth Vader vs. Team Punk Rock. One side advances, then there's a skirmish, then there's a mad rush to disperse, and then everyone regroups and the whole thing begins again. Lots of posturing/shouting of angry slogans, tons of broken bottles being thrown, glass shattering and going all over the place. I struck up a conversation with a nice guy also out to watch the police vs. anarchists. We sat on the curb chatting until the violence suddenly rushed our way and we had to run to avoid being caught up in it. We then decided to go dancing at a little club down the street to get away from the maddness of the rioting crowds. It was a nice way to shake off all the tension of watching people fight. I need to go out dancing more often, it's like a kind of therapy. When we were exhausted we sat and ate cherries, as there was a random bag of cherries sitting on the table. All in all it was a lovely, textured and interesting evening. Spontaneous fun is always the best kind.
Collapse