Last year, as I took my first step into the amazing world of mushroom hunting, it seems that the very first thing I stumbled upon was a Destroying Angel. This is something I can identify now – even in a smallish photograph – although I had no clue about the nature of this pretty little monster at the time. Behold, here is one of the most poisonous mushrooms known to man: 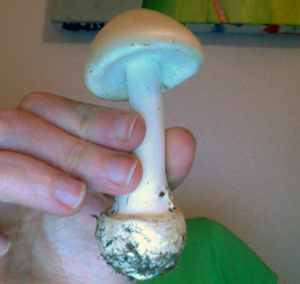 Looking back, it's hard to believe I actually held one of those things in my hand. It's like finding a hand grenade in the forest and then playing around with it. People who accidentally eat these mushrooms first experience terrible food poisoning symptoms, and then toxins from the mushroom go to work quietly destroying their liver. There's actually a lull after the initial food poisoning symptoms go away when people think the worst is over and they're out of the woods, but that's when the really lethal damage is just beginning. There's not much that can be done aside from a liver transplant at that point, and after about three days death occurs. So yeah, good thing I threw that one away. It sure was pretty, though! Pearly white, like a moonlit fairy.

I've been working away on a new painting these past few weeks, 'The Bone Cycle': 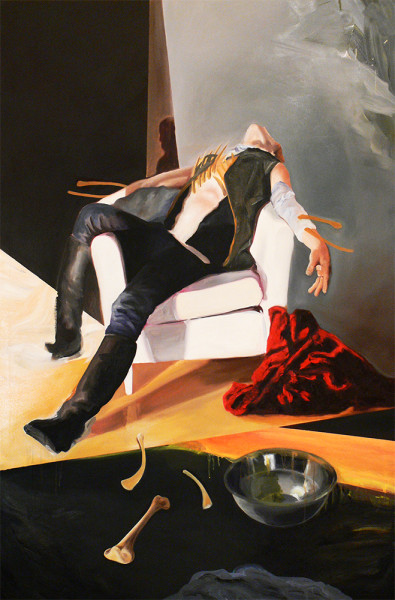 Yes, golden bones are falling out of his body. I made up a biological process that could act as a metaphor for personal growth and renewal, kind of like how snakes shed their skins and trees lose their leaves. I need to finish the boot and work on the bones to get them more 'golden' with highlights and shadows, but other than that this painting is almost finished! I struggled a lot in the beginning on this one, and for a couple weeks was completely blocked on how to proceed, but thank God I got through all that.
Subscribe